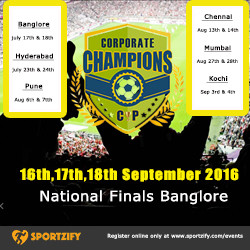 Goalz Unlimited is proud to announce the first of its kind, Corporate Champions Cup 2016.

The event will witness teams from 6 cities battling it out at their regional qualifiers and then at the National Level to be crowned CORPORATE CHAMPIONS 2016.

Following are the salient features of the tournament:

2.       Best player, Best Goalkeeper and Winner & Runner up awards for grabs at the regional qualifiers.

3.       All teams will be provided with Jersey, Shorts, Stockings and sipper for the tournament from Nivia.

4.       Jerseys, Shorts and Stockings to be provided by DSK Shivajians to Winner and Runner up teams who will represent your city in the National Finals in Bangalore.

5.       Travel and Accommodation to Bangalore will be provided to the regional qualifiers.

8.       The tournament will culminate with top 2 teams from all these 6 cities qualifying for the National Champions Cup Finals in Bangalore.

9.       All matches will be played at Fifa approved turf venues.

10.   Matches to be played under flood light also.

11.   Format of the tournament will be League cup knockout.

13. Winners and Runner up to get 2 night 3 day stay with our Exotic Vacation Partner.