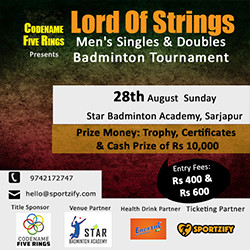 We are back with the kickass badminton tournament of 2016. Men's badminton is going to see some of the best clashes of 2016 between the best players of Bangalore Backed by Codename Five Rings as title sponsor the tournament's scale has reached a new level. Codename five rings are coming up with their new project with the best sporting facilities you can ever see in Bangalore.