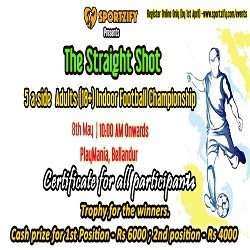 The Straight Shot - 5 A Side Football Tournament Bangalore

Past Events
>
The Straight Shot - 5 A Side Football Tournament Bangalore

The Straight Shot - 5 A Side Football Tournament Bangalore

Common Footballers of Bangalore. This is the time to show your skills with the ball. Participate and win big prizes. Something to win for everyone.

REGISTER ONLINE ONLY BELOW - BY 6th May. No onspot or ofline registrations will be accepted.

- Certificate for all participants

- Winning team gets a trophy along with certificates with position. Runners up also get certificates and cash prize.

- It's a 5 a side tournament. This means 5 players will be playing onfield including the goalkeeper. One substitues is allowed during the game. (Its 5 playing + 1substitute)

- Apart from finals in all the matches the match will be played in following timings.

- Finals will be played with each half of 15mins and break of 5 mins.

- Its a knock out tournament.

- Incase of goals being equal at the end of second half, we will have penalty shoot out to decide the winner for the match. Each team will get 5 chances to score in the penalties.

- No football studs are allowed. Any team player with studs will not be allowed to play and the team will have to play without that player.

- Playing barefooted is also not allowed.

- Incase of any violence by any player from the team, the referees decision will be taken as final decision.

- Under no circumstances any team can fight(physically) in the ground. If it happens then both the teams will be disqualified from the tournament.

- Onspot or ofline registrations are not allowed.

- Fixtures will be sent on registered email id on 7th May 7:30PM. Kindly check spam folder as well. We will also upload the fixture on the event page - www.sportzify.com/events.

- Images and videos of the event will be shared on 4th April.

- The Prize Distribution will take place at the end of the tournament.

- Teams are not allowed to change their team of 6 players throughout the tournament.

- Matches will be played simultaneously in both the available ground.

- If any team or individual does not respect the decision of the referee or line umpires and does not wish to continue with their decision then in that case the team will be disqualified from the tournament and the opponent gets a win.

Book Your Tickets Below. Hurry Up !!